Less than one hour into the final day, several notables fell followed by the bubble with Casper Wong delivering the fateful blow. Wong had aces (pic below: standing in blue) against the all in player’s ace-king, no bad beat arrived. Despite winning, Wong received a warning for slow-rolling. 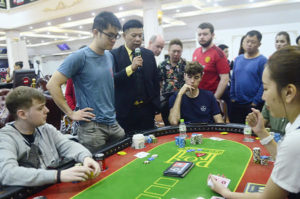 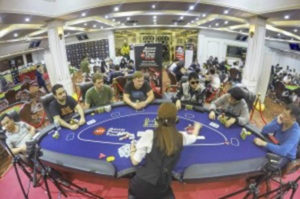 Schumacher took care of the next bust with 10♦ 10♠ unbeaten by Nguyen Duc Thanh‘s (5th) ace-queen offsuit. Down to four players, Kwon sent Tobias Cornelispacking with pocket eights over pocket threes.

Eliminating Rubin Labroo (3rd) was probably the sickest of beats dealt by Kwon. On a flop 6♥ 7♥ 5♦, betting action led to Kwon pushing his monster stack holding7♦ 5♣ two pair and Labroo risking it with 9♣ 8♣ straight. The turn J♦ kept Labroo ahead but the 7♠ river switched the standing with Kwon improving to a full house. 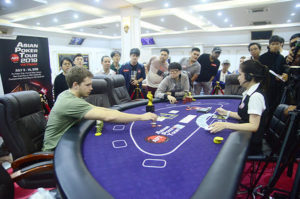 What followed was a long and arduous heads up battle lasting nearly two hours. Kwon entered with a 3:1 advantage and managed to keep Schumacher at a distance. Schumacher doubled up once but it wasn’t nearly enough to overtake the charging Kwon. The final hand saw Kwon push with K♠ 5♥ and Schumacher call for his tournament life with A♠ 2♥. The board ran 5♠ 9♦ 4♦ 2♣ J♦.

Congratulations to Eunho Kwon for his first-ever APT victory!

APT Player of the Series leaderboard