Aivaras Bardaukas wins the Welcome Event; 167 entrants for the Warm Up

Another action-packed APT Kickoff Vietnam 2018 with crowds of players piling in the Pro Poker Club in Ho Chi Minh to take part in today’s festivities. Upon the plate was the Main Event Warm Up. While that had long lines out the door, running on the side was the Final 8 of the NLH Welcome Event. See the recaps below.

After a thunderous opening day with 183 entrants for the NLH Welcome Event, only 8 players returned today to battle it out for the title and the VND 145,560,000 first prize. Although the final felt was dominated by Asians, it was the lone European, Aivaras Bardaukas from Lithuania who ran away with the victory.

Entering the Final 8, Bardaukas was right smack in the middle of the pack while leading in chips was Nguyen Huy Huong. After two hours of play, they were quickly down to half with Huong eliminating Tung Pham Thanh in 5thplace on a cooler with aces over kings. This drove his stack to over 1M which was more than half of the chips in play.

However, the four-handed bout was a troubling one for Huong. He lost a sizable pot to Singapore’s Erwin Ng with his ace top pair out-kicked by ace-queen, then he doubled up Bardaukas with K-Q losing to A♦ 10♦ on a board of 3♥ J♥ J♠ Q♠ A♠.

From there, Bardaukas took control. He picked up several good pots then booted Singapore’s Benedict Koh in 4thplace. Out next was Huong in 3rd, unable to regain his earlier momentum. Huong was downed on a very sick hand against Bardaukas. Both players were all in preflop with Bardaukas holding 4♦ 4♠ and Huong with A♣Q♣. The board ran a doozy Q♠ Q♦ 9♠ 4♣ 7♦ for a winning full house over trips.

Heads Up: Bardaukas vs Ng

The heads up round began with Bardaukas ahead in chips – 60/40. On Hand #4, Bardaukas claimed a huge pot without having to show his cards. On a raised pot preflop and progressive betting to the river, the board showed6♦ A♥ 9♠ Q♦ 2♣. Ng folded on the river bet.

Eight hands later, the final hand arrived with both players all in preflop. Ng with A♣ 4♣ and Bardaukas withK♥ K♦. The board ran dry and it was all over. The kings prevailed and Bardaukas triumphant.

Since this was a scheduled two-day event, the players only covered a total of 16 rounds at 30 minutes each. At the end of regulation, the field was down to 38 players, and with 28 of them guaranteed a return, this meant they were just ten spots away from the money.

The race to the title begins at 130pm tomorrow, Sunday, January 21. 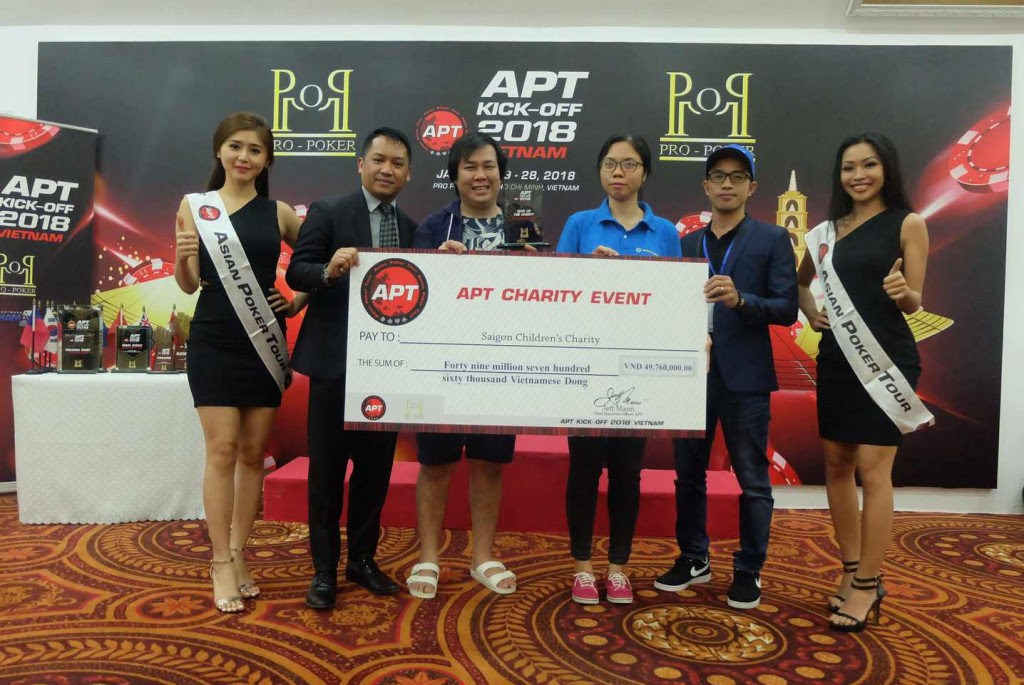 Last night, the Ante Up for Charity event generated VND 49,760,000 for the Saigon Children’s Charity. We’d like to thank everyone that participated in this event. Your contribution will go a long way in assisting the organization towards the education of disadvantaged children in Vietnam. Receiving the check today was Vuong Ngoc Vy Van,the Fundraising & Communications Manager of the organization.

It is going to be another hustling and bustling time at the kickoff with several events taking place on Sunday, January 21.